As you read this, over 6 million people are en route to the Bavarian capital of Munchen to relive an epic 1810 wedding celebration. Oktoberfest, which indeed begins in September and ends in October, draws nigh. Now, while often it feels like 6 million people have packed into The Standard, Biergarten, if ever there is a time to embrace the convivial, lederhosen-clad crowds, September 21st through October 6th, is it.

Even though it's a water commercial it really captures the spirit.

The festivities start this Saturday at The Steuben Parade on the Upper East Side. Our Standard Biergarten crew will float down Fifth Avenue and make their way downtown to Washington Street and Little West 12th Street where the games begin with traditional live Bavarian music, real Licher Oktoberfest Bier (it has a lovely toasty flavor to it, perfect for copious consumption) and a whole new Bavarian menu with plenty of German Würsts (sausages), freshly baked pretzels and Apfelstrudel with Vanille Sauce. We strongly encourage you to wear your traditional Bavarian costume. It really is half the fun.

Over on the West coast, it's going to be a Roktoberfest! at The Biergarten at The Standard, Downtown LA. They're celebrating Wednesday, October 2, 6pm – Close, with polka punk bands, raffles throughout the evening, and plenty of drink specials to keep the bier flowing. 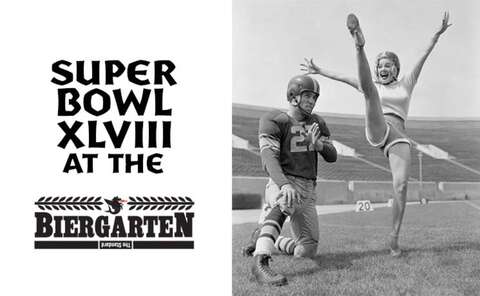