Prior to the episode, Ongina gave us the scoop on the grassroots beginning of the now internationally celebrated show, her most inspirational New York moment, and how a bacon-wrapped hot dog helped lead her to stardom. 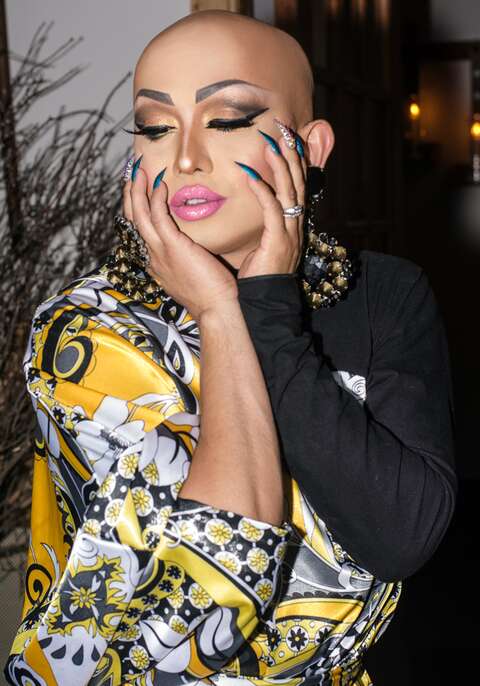 THE STANDARD: Let’s start at the beginning. How was Ongina born?
ONGINA: It’s actually quite funny you ask because being here is a full circle moment. I started Ongina in New York City in 2003! I was introduced to nightlife infused with so many artistic people like Susanne Bartsch, Sophia Lamar, and Amanda Lepore. I started with just a little glitter, fierce pumps, and boy shorts, but when I started working at Lucky Cheng’s, the girls there told me I had to give more of an illusion, so I started creating more feminine looks with a club kid thing. Both of those identities graduated to what you see now.

Didn’t you work at Lucky Cheng’s with Laverne Cox? Who were some other names you met along the way?
Yes! She was a dancer and I was a server. We used to cross paths in the dressing room, which was actually a bathroom in the basement. But the biggest inspiration I had before Ongina was born happened one day when I was walking around the Lower East Side early in the morning on my way to my boy work. Kevin Aviance, heading home from night work, walked right by me. I was like, “Who is this goddess?” He was no fucks given. During that time, house music and that scene was really predominant, so in that moment I knew I wanted to do something different outside of female impersonation with my drag.

So how did you end up in Los Angeles?
I worked for Intermix in NYC and I wanted to do more visual merchandising, so when the store expanded to Los Angeles, I asked the visual director if I could go. When I moved there, my focus was just Intermix, and I said I was going to box up the drag (which was a smaller box labeled “Ongina”). But I felt the nightlife was missing and not the same energy as New York, until I went to this one party in Downtown LA called Mustache Mondays and it felt like NYC. The kids were crazy and the music was amazing. So I decided to open the box and bring out Ongina on New Year’s Eve. I went out, I got my life, and I started to infuse myself in that LA scene, asking promoters if I could do gigs, even just for drink tickets! Whatever I could to put my name out there. Then you ended up on the premiere season of RuPaul’s Drag Race! How did that come about?
They basically sent out casting directors all over the clubs in LA that drag queens frequented. This one lady literally followed me around for two weeks asking me to send in a tape for this “new reality show about drag queens hosted by RuPaul.” I kept saying no because I was just starting a new life in LA and I wasn’t a full drag queen, per say. At the time, the casting process was to have your best friend assistant also be cast in the show with you and see what the dynamic was like. So I grabbed my best friend and we went out to this party and videotaped me doing all this crazy shit. In one scene I was eating a bacon wrapped hot dog saying, “Still a size zero, bitch!” I submitted an hour-long unedited tape two days before it was due. I had a series of phone interviews, then one day they called, put me on hold, put me back on and they told me I was cast on RPDR Season 1.

Drag Race has grown to show us different types drag, from Raja to Sharon Needles, but your season really set the tone for the series—with characters like you, Tammie Brown, and Nina Flowers all competing together. What was that experience like?
They never aired this, but when I walked into the Werk Room (wearing Proenza Schouler shoes and a Prada bag, thank you!) I saw Shannel, Rebecca Glasscock, and Nina Flowers, and I was like, “Are you guys the hosts?” They looked so fabulous that I thought they were judges! But then Shannel was like, “Oh no, girl. I’m trying to make some money!” And then fast forward to filming, you forget you’re being filmed and sometimes forget you’re competing. It felt like fun assignments...until you’re on the runway. And then you’re like, “Oh, right, I’m here to try and win five dollars.” [Laughs.]

Something incredibly powerful you brought, in addition to your looks and warm personality, was being the first queen to come out publicly as HIV-positive on the show. Did you expect to share that going into the competition?
That challenge was to be a spokesperson for MAC Viva Glam, which benefits an AIDS fund. So I knew how important it would be for me since it hit so close to home. I wanted to do well, but also give the audience something inspirational. Me coming out didn’t happen until Ru said I had won. I was overcome with fear and happiness and validation. After living a life of secrets as positive early on in my life, I then felt fully accepted. Years later, it still inspires people to live a life that is not shameful, and it has helped me open up about how I became positive and how my story could help prevent someone else from becoming positive.

What was that moment like on set?
There was wasn’t a dry eye. Except Ru, but I don’t think she has tear ducts. You could hear a pin drop. Everything kind of stopped. But I still had a feeling of fear because my parents still didn’t know and I had to anticipate coming home to that. The producers asked me for permission to show the clip because it was really powerful. At that point I had nothing else to hide, so I told them yes.

Did you leave the competition close with any of the girls?
Jade became one of my really good friends. Tammie Brown comes over for dinner in full drag! Shannel and I are close, and I’m friends with Nina.

Was it strange seeing Bebe Zahara Benet on All Stars 3?
It wasn’t strange as much as it was supriring and upsetting, because that was my spot! I really, really, really wanted to get on All Stars. But it just wasn’t my time. You know, I would love an All Stars of all the first eliminated from every season. But then how would it feel to be the first one to leave that season? Would suck, right? [Laughs.]

Did you ever imagine the show would become such an international phenomenon?
It’s amazing, and I am a little bit jealous because they now have the budget to do all these amazing things! My favorite rumor is that we stayed in the basement of the WoW studios [during our taping]. I mean, we stayed at a Ramada, but it wasn’t in a basement!

You already went to the taping of the Season 10 finale, but I guess you can’t tell us anything, huh?
All I can say is look out. You might see a little bald queen on stage.

I hope so! And if not there, on All Stars 4, please. What’s next for you?
After Drag Race, I focused back on my visual merchandising career and excelled at that. Then last year I decided to quit my job to make Ongina full time. I was afraid of losing the stability from my other job and didn’t think drag would be enough, but it has been. Now, I want to elevate the persona of Ongina. I have 10 years to prove and I am catching up at this point. Beyond sharing my story as HIV-positive, I have much more dimension and I want to show it. I’m going to keep putting myself out there so WoW recognizes my talents and books me for All Stars! I’m going to keep showing who Ongina is and what she’s capable of, and I’m gonna work my fuckin’ ass off! 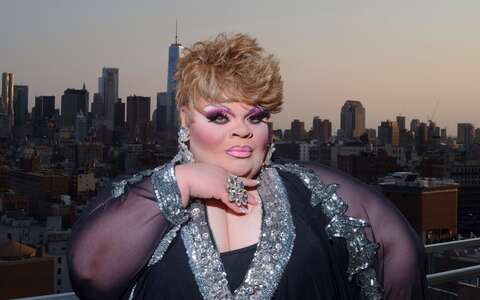 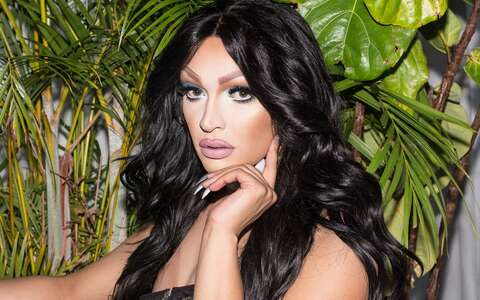