From 1976 to 1981, 'WET: The Magazine of Gourmet Bathing' was the world’s first and only underground publication dedicated to gourmet bathing. And what, pray-tell, is gourmet bathing? Turns out: not such an easy thing to define. We spoke with 'WET’s' founder and creative director to trace the source of this most influential and effervescent magazine.

In mid-seventies Los Angeles, artist / architecture student Leonard Koren was looking for a way to repay the models who had posed for his recent art projects. He decided to throw them a party. He wanted the evening to be something unexpected and a friend recommended he check out an out-of-the-way Russian-Jewish bathhouse. It was perfect.

On a sultry late-summer's eve, his friends danced, drank, and soaked in suits of every stripe, from bathing to birthday. It was one of those nights sprinkled with something special. "I just can't get over the mixture of people here and the lack of self-consciousness," a partygoer described in an LA Times feature that ran shortly thereafter. A reporter had  serendipitously been in attendance and scrambled a photographer who snapped a picture of Koren welcoming fashion designer Rudi Gernreich (inventor of the world's first topless bikini). The coverage ran large and suddenly Leonard had cultural currency.

But how to spend it? He wasn't sure, until one day, just like Archimedes before him: Eureka in the bathtub! Literally, he was taking his habitual afternoon bath when the idea struck. He would start a magazine about gourmet bathing. Above: Leonard Koren (on left) with computer industrialist Max Palevsky shaking hands underwater in Malibu. Circa 1980
STANDARD CULTURE: Were you intimidated to start a magazine with no experience?
LEONARD KOREN: It was definitely the first problem I encountered. I had no knowledge about how magazines were made, but I was an artist, and artists are resourceful people, and figure things out. And so, I proceeded as an artist would.
Your covers ran the gamut – illustrations, collages, celebrities. How did you decide what to do? Did they evolve out of pieces you were working on? Or did the cover idea come first?
There was a lot of dynamism involved in the entity of WET. Just the existence of a magazine about gourmet bathing created a buzz and it began to attract people, other artists, illustrators, writers, designers, and they brought their ideas and energy to the project. And all of our combined energies really determined how the issues would evolve. The first covers were things that were borrowed from my previous bath art, imagery and abstracted motifs. But then later on, people suggested ideas for covers, or shootings that we should do, and we did that. And then after a while, because we were located in Los Angeles, our magazine became hip with Hollywood. Like when Richard Gere’s agent started calling. Was that pre-American Gigolo?
This was late ‘70s. You’ll have to do the math yourself. I think it was. [American Gigolo came out in 1980] Herb Ritts used to come and bring us his photographs. He was the one who actually brought the earliest photographs of Richard Gere. They were good buddies. We sat on it for about a year and finally thought, you know, “why not?” There were a few other celebrities we also put on covers: Deborah Harry, Sissy Spacek, Priscilla Presley. They weren’t super, major celebrities, but they were people who had some kind of resonance with the WET audience.

But we also were a little skeptical, or cynical about celebrity covers. We didn’t want to fall into that bag. So, at a certain point, we stopped doing that and went back to our more conceptual covers.

What do you think makes a successful cover?
I think that in WET terms, it always had to have a strong sensorial, sensual component. And I don’t mean sensual, as in sex necessarily. But I mean, it had to engage the senses. It also needed a certain conceptual intelligence. In other words, it was what you saw, but there was also different layers of depth to it. And I think the third part was that it had to be something unexpected, that you would do a double-take on.

Do you keep up with today’s independent publications? It feels like there is a new title coming out every month.
No. When I was publishing WET, I was totally 100 percent into the world of magazines. And once I stopped doing it, I passed on the baton. Left: Photograph by Guy Fery from WET July/August 1978 Right: Photograph by Leonard Koren from WET July/August 1981.
"Sure, nakedness, water, the absurdity of being naked in water or steam, or other substances ... the joy of letting go of your normal social roles ... the extraordinary qualities of bathing environments ... these were all important elements in the mindset of 'Gourmet Bathing.' But, we’ve shied away from being too literal, because that was a kind of deadness." I love this quote from the piece, A Long Overdue Introduction:  "'But bathing?' A friend of mine asks, 'why not gourmet shoe tying?' Because something hilarious and sacred happens when naked skin meets water under the right conditions, that’s why." Can you expand on that? What are your thoughts on being naked and wet?
The philosophical stance of WET was not to be too linear. If you were too linear, if you were too explicit, you lost the whole point of the fragility - not the fragility - but the effervescence of the bathing experience. Bathing is something that is perceived in the moment, and you really don’t want to think about it too much. Sure, nakedness, water, the absurdity of being naked in water or steam, or other substances ... the joy of letting go of your normal social roles ... the extraordinary qualities of bathing environments ... these were all important elements in the Gourmet Bathing paradigm. But, we’ve shied away from being too literal, because that was a kind of deadness.

How did you meet Matt Groening? [Creator of the Simpson’s]
Matt called us up and said, “Hi, my name is Matt. I draw cartoons and I’d like to show some to you. Can I come over?” It was simple - that was it. It was obvious that he had an interesting point of view. He was incredibly cynical, but with a self-deprecating edge. And his drawings were quite reductive, almost conceptual, which was appealing to us. So we gave him his first, I guess, job in publications. And he ended up writing a lot of our fashion copy.

Were you surprised when The Simpson’s took off and became the longest running TV show ever?
I was extremely happy for him. The success of his show happened quite a few years after WET. I thought it was ironic that somebody whose first cartoons were so focused on the shallowness and muddle-headedness of life in Hollywood should become a fixture of successful LA entertainment. But he’s undeniably a very talented person, and it’s always good to see talent rewarded.

There have been two features in the New York Times recently talking about a cultural and artistic migration from New York to Los Angeles. What’s your take on that?
Yeah, I’ve read those articles with amusement, but then also happiness. I grew up in LA, and I also spent a lot of time traveling to New York. And to me, it seemed that the same people who live in LA, live in New York – the same kind of drive and creative energy. The degree of talent is the same except that it manifests itself differently because of the geography, the social mores, the nature of the cultures. That makes sense. You live just north of San Francisco now. How has Silicon Valley changed that neck of the woods in your opinion?
I have an acquaintance who started one of the big-name tech companies that you read about all the time. We go out for coffee and it’s enormously stimulating to be in his world for an hour or two. And this incredible youthful energy, it’s very finely focused. And it’s much different than the art energy of, let’s say Los Angeles. The tech mentality is to measure things. They’re coming from engineering backgrounds. They’re creative, but they’re not artists in the way that I would describe them.

What’s lacking would you say?
What’s missing is the poetry. Generally, I think of art as poetry-based. I don’t mean like iambic pentameter, but I mean a sense of grace, and a reliance on intuition and epiphany. These are values that are anathema to the let’s-measure-everything attitude of technology.

The party that inspired WET, I was imagining what that would be like today. The intangible, but very real “social energy” it generated can all be measured now by social media: X number of geo-located Instagrams, and “Likes,” and reTweets, and trending hashtags, etc. Are these applications simply sharing what was before un-shareable? Or is it a totally different world now?
Well, you know, the term, the Look-Down Generation?

Sure, looking down at the phone.
How could you be fully immersed in the sensual universe if you’re glued to this digital device? At the time of WET, people really gave themselves to a high degree of sensual indulgence. Yes, now we can carry around music. We can see a video at any moment. But these are highly attenuated forms of sensorial expression. That’s what’s so great about bathing. It’s fully immersive. It is total immersion.

Hereʼs another way to think about it, from Gourmet Bathing: A Very Late Introduction: "Like the costumes that are shed, the nakedness in bathing is psychological as well as physical. You get exposed to and touched all over by the same stuff you’re mostly made of. Water doesn’t recognize any one spot as prettier or sexier than any other. Water wants it all."


We encourage you to get wet at the Spa at The Standard, Miami Beach.

Leonard Koren is the author of several books including Making WET, Wabi-Sabi: For Artists Designers Poets & Philosophers, Wabi Sabi: Further Thoughts, Gardens of Gravel and Sand, Undesigning the Bath and many, many more. 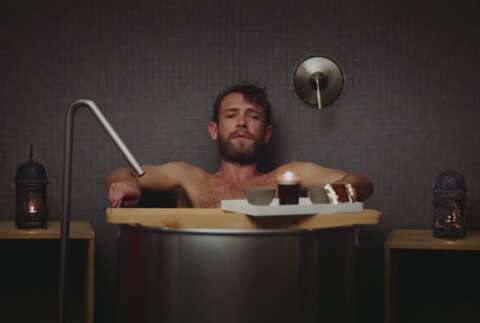 A Simple Man Spoiled by the Spa