The previews are over and today Art Week opens to the art-loving, champagne-swilling masses. You won't be able to see a quarter of what's on view, but here's a map to the main events. Below, our concierge, Crispy, weighs in on the week's must-sees.

AI WEIWEI: ACCORDING TO WHAT?
This exhibit, which was recently at the Hirschorn in Washington D.C., is the first major international survey of the artist’s multi-faceted catalogue, and includes everything from small-scale photo prints to monster-sized sculptures. It’ll be the talk of the week, so you should definitely make time. The Pérez Art Museum Miami (PAMM) is open every day from 10am to 6pm, and ‘til 9pm on Thursdays. Admission is $12. 1103 Biscayne Blvd.

TRACEY EMIN AT MOCA
It’s only right that MOCA would host the first-ever American museum exhibition dedicated to British artist Tracey Emin—they’re the first U.S. museum to buy her work, Why I Never Became a Dancer, back in 1989! You can see that piece, and 59 other works from her long and illustrious career, from March 4th thru the 9th. 770 NE 125th St.

THE MODERN LIFE CONCEPT HOUSE
Elle Décor’s Modern Life Concept House is always worth a visit. This year it’s on Sunset Island II, from December 4th thru the 8th. Every square inch of the place has been transformed by a different designer, and the house itself is even for sale. Tickets are $35 at the door and benefit the Sylvester Comprehensive Cancer Center at the University of Miami. 1435 West 27th Street

CHARLOTTE PERRIAND’S BEACH HOUSE
Underappreciated but hugely influential French designer and architect Charlotte Perriand is finally getting her due this Design Week. Go see why on the beach in front of The Raleigh, where LVMH and other superfans have constructed her La Maison au Bord de l’Eau (House on the Beach) based on her original plans for a vacation cottage. The house is filled with her furniture designs, too. It’s open to the public from December 4th thru the 8th. 1775 Collins Ave.

A PORTRAIT OF MARINA ABRAMOVIC
Artist Matthu Placek’s 3-D, single-shot tribute to the world’s most famous performance artist is only six minutes long, so there’s no excuse for missing out. Ms. A appears naked and white as a ghost in the film, which was shot at the site of her under-construction performance art center. It’s screening at the Jewel Box pavillion in Wynwood every 15 minutes from 6pm to 3am, December 4th thru the 7th. 2100 Biscayne Blvd. 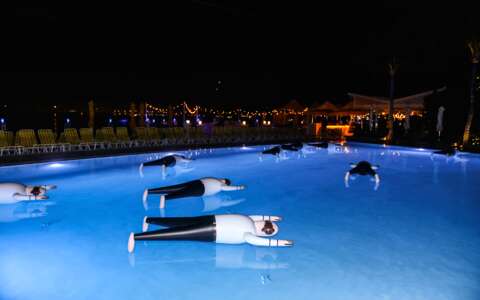