Photos of Erin by Roman Koval


“The most important thing for folks to understand about contemporary art,” says Erin Christovale, assistant curator at The Hammer, “is that you don’t have to like it. [Art] is an experience, just like anything else. No matter who you are, it’s your intuitive response to the work that matters.”

Alongside Hammer veteran Anne Ellegood, Christovale co-curated the museum’s fourth and latest iteration of its Made in LA show: a biennial that showcases the work of artists living in Los Angeles. Each time, the museum chooses two curators to lead the show, and, unsurprisingly in a city as sprawling and diverse as Los Angeles, each show is completely different from the last.

Inclusivity and representation are pillars of Christovale’s curatorial practice; this year’s Made in LA features the work of artists of all ages, from their 20s to their 90s, and features the work of artists of diverse ethnic and racial backgrounds, as well as diverse gender and sexual identities. The artists “are folks who have political bodies,” and while the show isn’t overtly political, Christovale says, “[Made in LA 2018] is sort of politically adjacent. This is my story in an object.” Rather than highlighting any overt themes, Christovale and Ellegood selected urgently contemporary works. “This moment has forced a lot of us to look at words, to think about personal narratives, to think about our collective communities, and that’s what the work in the show looks and feels like,” says Christovale. “There’s a desire for people to come together, whether that looks like a group show, or whether that looks like people marching in the street.”

The stories and objects in Made in LA 2018 come together around the shared quality of Los Angeles-y-ness: there’s a certain surrealism, an enchanting intensity, an inviting lightness that leads to depth if you’re willing to follow. “In LA, you can really sit in your solitude,” Christovale says, “You can climb mountains. You can go in the ocean. There’s more of an openness here. LA still feels like the new frontier.” The experience of Los Angeles is, rather famously, one made up of both immersion and psycho-geographical projection; it is a city unified only loosely by geography, only loosely by the idea of it, an experience described by Richard Gilbert as “physical shapelessness.” 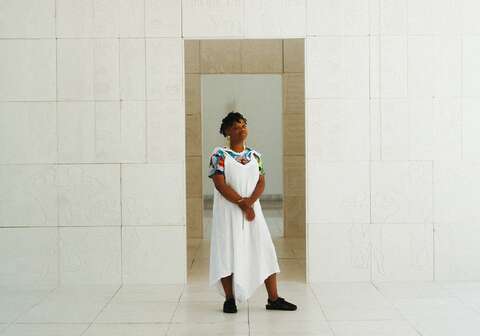 Christovale is uniquely qualified to reimagine the future of art in LA. As a lifelong resident of LA County and with origins in film programming, Christovale’s interest in art that is as immersive and bright as California’s landscape has been a persistent theme. In 2013, alongside co-curator Amir George, Christovale started Black Radical Imagination, an ongoing film program that is largely concerned with the concepts and aesthetics of Afrofuturism. With its roots in music (like Parliament-Funkadelic or Sly Stone), in early hip-hop and in sci-fi, Afrofuturism can be considered a genre, an aesthetic that looks to the past to imagine a new future without white supremacy. In the words of Jenna Wortham, it posits blackness as a technology in and of itself.

“We’re [living] in an interesting moment where the idea of truth is not present. Obviously, we have our President just straight up lying about things. On the other side of that, I think artists are giving themselves permission to imagine and create their own worlds, and their own modes of existence. In some cases, it’s an act of self- care, and for other folks it’s an act of survival. A lot of these artists are seriously thinking about what world-making actually looks like and how it starts. It’s not necessarily this grandiose gesture. It can be a small object that makes a huge difference. At a time where a lot of us don’t feel liberated, the fact that we can tap into our minds and our bodies to create these new futures is incredibly important.” 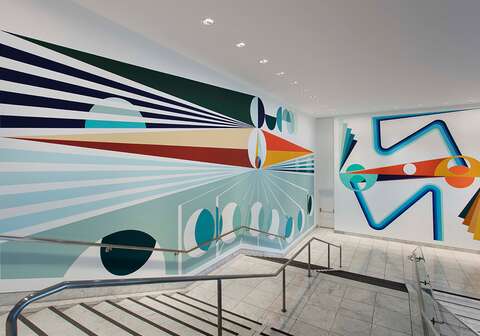 The Hammer’s lobby features the work of Eamon Ore-Giron, an interdisciplinary artist whose painting practice reimagines modernism from a sociopolitical lens. This mural, entitled Angelitos Negros, references a Venezuelan poem from the 1950s, that became something of a rallying cry and a Pan-American anthem. “In Los Angeles, the city of angels—what does it mean to be the black angel?” says Christovale. The piece “speaks to the afro-latino diaspora here, [to] communities that aren’t deemed visible, to communities of fallen people.” Linda Stark’s work toys with stereotypes associated with womanhood. Her work is concerned with the sacred feminine, but dispenses with a more familiar goddess vernacular in favor of something ordered, colorful, poppy, surreal, hyperreal, and at times, deceptively saccharine. As a descendant of the Gabrielino-Tongva tribe, a community of Native Americans who have lived in the Los Angeles area for over eight thousand years, Mercedes Dorame’s relationship to Los Angeles is complicated by the politics of ownership, by the very deliberate campaign of erasure, and by the foggy collective memory loss. The Gabrielino-Tongva are not federally recognized, and according to some sources, died out long ago. Dorame’s earthworks and their photographic documentation activates the land with “interventions” that evoke ritual. As the denial of climate change persists, LA has seen a slew of natural disasters in its surrounding areas in the past year; the conceptual and visceral relationship to the landscape is as much a part of the history of art in LA as it is vitally contemporary. EJ Hill’s Excellentia, Mollitia, Victoria is anchored by his endurance. “Essentially, he is standing in his gallery every day for the duration of the show,” says Christovale, “He’s committed to it in that he’s not taking any breaks.” The gallery is concerned with education and personal development from within “academic institutions that are built around us, but aren’t necessarily for us.” As a resident of LA County's Mount Baldy, Charles Long watched as the landscape around him was overrun by a virus-inflicting beetle and caused many of the trees near his home to rot. The trees were chopped and left as stumps, and the artist was struck by how much the stumps looked like a biological cross-section of a human penis. He has reinterpreted these shapes in a new group of sculptures for Made in LA 2018 called paradigm lOst, illustrating a metaphorical end of the patriarchy. “One thing that folks have said [in response to Made in LA 2018] is that even though this show has a lot of heavy things that it’s bringing to the table, for whatever reason, it feels very light,” says Christovale, “I think humor is a tool. It’s a therapeutic tool. It’s also a technique that can bring opposing people together for conversation.” His “forest of dicks” is undeniably whimsical, albeit in a Freudian way, and feels in conversation with the original Surrealists. He’s “not just thinking about patriarchy in a political way,” says Christovale, “but in an art historical way.” “Cinema has always been a therapeutic space for me,” says Christovale. Suné Woods’ video, Aragonite Stars, explores the spiritual and healing powers of water in relation to complexities of the diaspora and black intimacy, and is an important addition to Christovale's Black Radical Imagination project.