The culmination of the artist’s two-year journey from illness to recovery comes to The Standard Plaza at Washington and 13th Street. See the sculpture before July 3rd.


Like many stories you’ll find here on Standard Culture, this one begins in the 5th Century BC.

OK, maybe not, but this one does, and it comes down from a famous writer with the untouchable nom de plume Pliny the Elder. Pliny describes a competition in which five famous sculptors of the day were commissioned to produce statues of the mythical race of female warriors known as Amazons for a temple dedicated to the goddess of nature (Artemis in Greek religion, or Diana in Roman). The sculptors themselves would judge the winner.

Seven-thousand years later, the winning entry in the contest now stands in a place of prominence in the Greco-Roman wing of the Metropolitan Museum of Art where the artist Prune Nourry encountered it during a visit this past winter. Six-and-a-half feet tall, and made from grayish-white marble, the Amazon stands with her right arm lifted above her head. Her robes are torn, her weapons lost, and just below her right breast a gash spurts blood. This Amazon has seen the worst, but her expression is defiantly serene. For Nourry, the sculpture resonated deeply. A year-and-a-half earlier, Nourry was diagnosed with breast cancer. She underwent treatment and now is in recovery, but that day in the Met, she felt a deep connection with the statue and its expression of strength and composure in the face of grievous indignities. The word “Amazon” also rang with special significance. Months earlier, as she was preparing to go through chemotherapy, Nourry asked her friend—the same friend who was accompanying her to the museum that day—to cut off her hair. Upon removing the braid that Nourry had worn and attended to daily for nearly decade, the friend described women battling cancer as Amazons. The word lodged in Nourry’s memory, and now, the idea for a new project began to form.

Of course, as an artist, everything happens for a reason—mining one’s experiences and turning them into works of art is the name of the game. Over the previous decade though, Nourry largely kept her distance from personal themes, choosing instead to explore complex sociological issues that captured her fascination through a multilayered art practice largely comprised of sculpture, but incorporating performance, film, science, anthropology, and even food. “I thought I was working in a very objective way. I could have been a sociologist. For me, every project was a way to study humankind.” 
In Holy Daughters (2010), Nourry explored issues of gender selection by displaying a series of otherworldly half girl/half cow hybrids in public spaces around India, where the cow is a sacred symbol and technology and gender disparities have unbalanced the social order. Nourry interviewed Indian viewers and created a film documenting their responses. In her Procreative Dinners series (2009), the artist worked with chefs to create high-concept meals mixing art, science, and gastronomy that explored aspects of in-vitro fertilization. 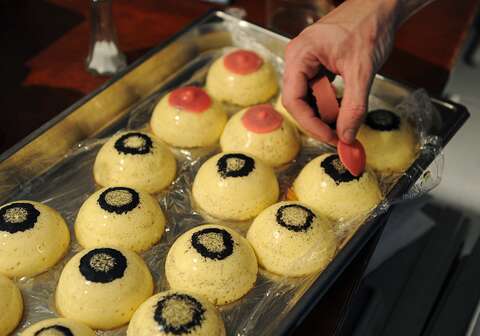 “When I learned about my illness,” Nourry explained, “it felt kind of strange because I realized it had so many links to projects I had done before in the past ten years.” In perhaps the most fateful coincidence, Nourry produced a show immediately prior to her diagnosis about imbalance, environmental toxicity, human disequilibrium, illness, and cancer, in which she placed acupuncture needles in sculptures. “The day the show opened, I didn’t have hair anymore. I was going through chemo. I was the most imbalanced of all the pieces in the show.” Ultimately, Chinese medicine would become a pillar of Nourry’s recovery. Prune Nourry standing in front of “Destruction is not the end”, making of the Musée Guimet show, Paris studio, 2016, © Louis Teran


Over this summer, the culmination of Nourry’s journey has been taking shape in a massive warehouse in the Brooklyn Navy Yard. Thirteen-feet-tall, The Amazon is a powerful personal interpretation of the sculpture she encountered at the Met. “The Wounded Amazon is at the intersection of many of my projects,” she explains. “It’s marks the end of a two-year journey. The sculpture is very symbolic to me. It carries a bit of all my projects in it.”

Besides being twice the size as the original, The Amazon diverges from its inspiration in that Nourry’s sculpture includes blown glass eyes that give it an eerie, unnervingly soulful effect. In addition, thousands of incense sticks as acupuncture needles will be inserted into the sculpture as an offering. For the artist, the true culmination begins today when The Amazon goes on view at The Standard Plaza at The Standard, High Line on the corner of Washington and 13th Street until July 3rd. “I think you learn a lot by letting it go,” she explains. “At some point, if your work is in public space, you don’t know what is going to happen. It’s not in your hands.” 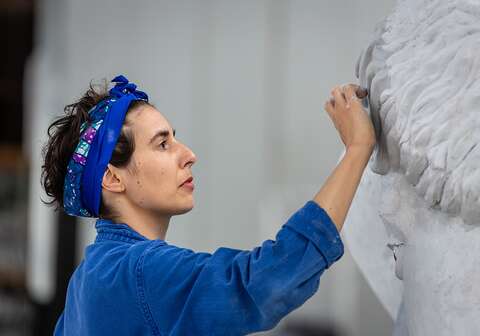 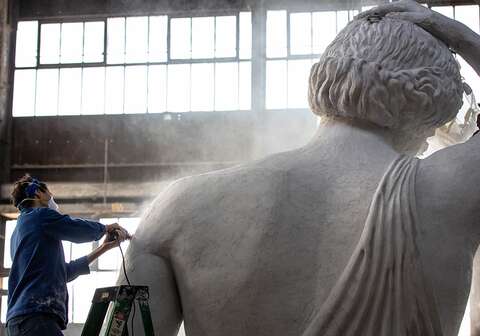 Nourry sculpting "The Amazon" in the Brooklyn Navy Yard.


In keeping with the confluence of kismet, personal, and communal themes, it’s worth noting that the sculpture lands at a particularly salient moment in which women’s rights and equality have come at the forefront. While Nourry maintains that she produced the work for “selfish” reasons, perhaps The Amazon holds a universal symbolism.

“We’ll see what people feel,” she says. “I hope it might help in some way or another some woman who went through the same thing. The most symbolic thing for me is the catharsis that such a sculpture can be for me, as a sculptor, but also for the woman looking at it. It might be a kind of cathartic gesture that can help heal in its own way.”