Last week at The Standard, Hollywood, a new neon rose up above the Sunset Strip, taking its place in the iconic visual landscape of the notorious LA thoroughfare. The message of the piece, however, exists in sharp contrast to some of the other neon signs that one finds along Sunset’s sight lines. Titled Champ, the 43-foot sculpture by British-American artist Zoë Buckman depicts the glowing white outline of a woman’s uterus outfitted with oversized boxing gloves. If the sculpture looks familiar that’s because when Buckman created a smaller version of Champ in 2015, it struck a deep chord and took off as a symbol for the burgeoning intersectional feminist movement on social media.

“I love flipping the preconceived notions of material,” Buckman says when we sit down at her home and studio in Brooklyn. “We’re used to neon telling us something like where to go or what to buy, so it’s really exciting to me to take this material that really came to be in the '50s, which was both incredibly oppressive and visually so rich for women, and make a statement.” What does her neon say? “My neon says, 'We are here, we want to be seen, and we are taking up space. We celebrate ourselves and we are fighting for our rights.'”

Commissioned by Art Production Fund with crucial support from Stacey Bendet of Alice + Olivia and hosted by The Standard, Champ comes at a time when the #MeToo movement has pushed sexual harassment and assault to the foreground; when millions of women have twice marched on Washington and other cities to demand protections; and when powerful Hollywood women like Oprah have stood up and declared “times up!” for the mistreatment of all women.

“We are really sensitive about any work we show,” says Art Production Fund's executive director, Casey Fremont. “Anything you put out in public, people aren’t necessarily seeking out. If they go to a gallery to see a work, they are going to see that work, they aren’t on their way home.” Fremont adds, “Our mission is to expand awareness through contemporary art and our past projects like Prada Marfa and Seven Magic Mountains have done that. Zoë’s Champ obviously does that.”

Champ has already become a symbol of the nationwide reckoning taking place, but we wanted to know more about the thinking that went into this latest, larger, more public version of the piece. We sat down with Buckman and Art Production Fund’s Casey Fremont to hear about how the work came to be, intersectional feminism, and what they hope Champ adds to the public debate about women rights. THE STANDARD: Why did you create Champ?
ZOË BUCKMAN: The political climate and the need to make a work about the status quo for women. The response to the first, smaller sculpture that I made in 2015, from men and women, inspired Art Production Fund and I to act on a conversation that we have been having for several years now about wanting to do something. We have been trying to figure out the right time, place, and piece.

Why is this the right time and The Standard, Hollywood the right place?
FREMONT: Like Zoë said, when she created Champ, the response was universal, and with any public art work, you want to make sure that people can relate to it for many different reasons. As the responses were diversifying and coming in to Zoë through social media, we realized that it made perfect sense as a public art work.

What did the social media comments reveal to you about the state of women right now?
BUCKMAN: The responses were a reminder to me that women are very hungry right now to really be heard and really be seen and not be put in boxes and not be held to impossible standards of beauty or behavior that are unnatural. They were a reminder to me that women don’t feel that they are represented and that they have agency.

BUCKMAN: I had a few requests for the image from women who wanted to have it tattooed on them and that has never happened to me in my career. I know that people do that all the time, but that to me is yet another reminder that Champ is speaking to people in this moment. How have all those reactions informed this newer, public sculpture?
BUCKMAN: I made Champ originally in white, and then I made a pink version. During our first conversations, the public sculpture was going to be pink, but the more we thought about it, and as movements like #MeToo have played out, we felt strongly that we want men to be further engaged in the feminist movement. Intersectional feminism has to transcend gender. If I’m creating something that’s going to be a part of this conversation, then for me, it is important that the artwork remain as gender neutral as possible. So the initial conversations and the current ones now helped us decide to go back to white.

FREMONT: We didn’t want men and boys to see pink and think, "That’s a woman’s piece," or "That’s for girls."

Is the idea for the public staging of Champ to get beyond the current thinking that reproductive rights or issues that have been seen traditionally as women’s issues are actually men’s and women’s causes?
BUCKMAN: One hundred percent. I used the boxing gloves initially because they are, by nature, a symbol of masculinity. Part of marrying the uterus to the boxing gloves wasn’t just about being in “fight mode” as women in this society, but about creating a sculpture that felt like an intersection between masculinity and femininity. 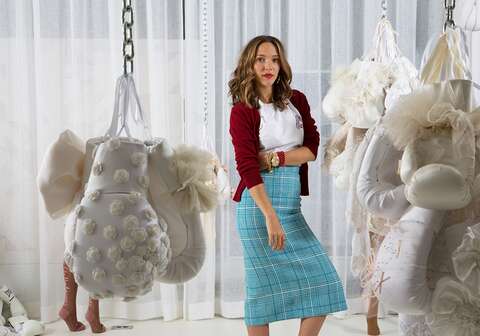 Champ is going up at a time when we are in the midst of two burgeoning women’s movements—#MeToo and the actions spurred by the Women’s March. These two movements are radically reorganizing the ways we as a society are looking how we have portrayed and treated women, and what we should do as a culture to make society more inclusive and safe. In what ways does Champ envelope this reckoning?
FREMONT: Well, the timing was actually a coincidence. We have been fundraising for this project for well over a year. The conversations have changed in the year, and, along with it, the reasons for the sculpture being relevant. It’s reflective of everything that’s going on at this time, which speaks to the power it had all along. In choosing this piece, we had a little taste of people getting riled up and reacting to it, but the conversations were happening mostly in private. Now, it's much more of a public conversation.

This piece emerged from a personal place—namely, Zoë’s struggles with the reproductive healthcare system—which is also a very important conversation, in addition to the one we are having about sexual assault and harassment. Given the nature of public art and the public’s focus on harassment, do you fear that the conversation around women’s healthcare options will get lost.
BUCKMAN: I think that’s why the programming is really important. We will endeavor to reach out to a diverse group of people focusing on an array of issues to start different conversations. So Champ is not just a comment on #MeToo, but what it means to be a woman in general living in this society.

FREMONT: I think what’s great about the piece is that it will take on additional meanings. The idea is that the piece will include men and women and try to have a national conversation by having events across the country about issues like women’s reproductive rights or self-defense that Champ brings up. 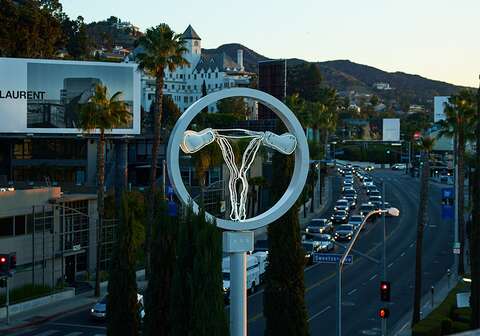 How is Champ representative of your larger practice as an artist?
BUCKMAN: I’m super fascinated by polarized states: hard and soft, or organic versus manmade. Champ, for me, is another manifestation of that dialogue within my work. You’ve got light and you got leather, you’ve got this uterus symbol of womanhood, and then you have boxing gloves as this symbol of masculinity. Thematically, the impetus for most of my work comes from a difficult place—something that I’m struggling with and trying to resolve through my art. I made this piece when I was just overwhelmed by all the statements that were circulating in the run up to the election about women and our rights to choice, access to sexual healthcare, and rape. I felt this onslaught of misogyny as an attempt to weaken women. I was in a mode when I first made Champ where I was feeling very trapped and threatened. Like “Let Her Rave” and the series “Every Curve,” Champ is about me dealing with language as a feminist.

How is Champ an expression of your feminism?
BUCKMAN: One thing I really try to do is not be too didactic with my work. I don’t want to tell anyone what to think. I really admire feminist artists who use their voices to scream and shout, but that’s not the work I make. I want to reach across and bring people in. My hope for the feminist movement is that it does become truly intersectional and less exclusive and judgmental.

What do you want this piece to do in the public?
FREMONT: The sign of a good project is that it gets people to see things differently. I hope that this piece does that. What to Expect at the New Museum Triennial 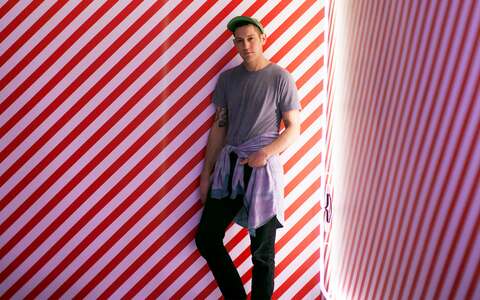