Curious what’s happening on the Los Angeles art scene now? You should be. For decades, the city has been attracting artists with its remarkable light, warm weather, and wealth of cheap space, and those draws have borne fruit in the form of a thriving art community. Add to that world-class museums (the Broad, Hammer, LACMA, MoCA), forward-thinking curators, galleries showing all kinds of work, and voila, instant art scene! Well, maybe not instant, but you get the idea.

The seven young(ish) LA artists here offer a snapshot of the new wave of work taking shape now. What do these artists have in common? Almost nothing! Is their style quintessentially LA? Not really. And that’s the beauty of it. LA’s scene has reached a level of richness where no one style, approach, or school-of-thought dominates. What you have instead, is a plethora of artists taking interesting risks, making a diverse array of work across every conceivable medium, and sometimes, even re-imagining mediums altogether. And that, gentle art goer, is the surest sign that something really good is afoot. Each new painting by Dianna Molzan seems to emerge from an entirely different conception of the medium, complete with its own aesthetic rules and even physics. Her richly covered canvases may cover only part of a stretcher, or be little more than a net around a frame. Just when you think you have her pegged down, she bobs and weaves unexpectedly, like a boxer or a slapstick performer taking painting in surprising turns. Edie Fake draws on Chicago Imagism, the Hairy Who, and diverse forms of outsider abstraction to create intricate, enchanting drawings that suggest early video games spliced together with carnival funhouses that the artist conceives as queer spaces. Fake made waves in 2015 as a member of a group known as the USC7, resigning from the school in protest to corporatization measures. He is also a respected graphic novelist, winning awards for his Gaylord Phoenix collection, which follows the danger-fraught journeys of its namesake, “a creature willing to sacrifice anything for love and self-knowledge.” Workers Leaving the Googleplex from Andrew Norman Wilson on Vimeo.

Norman Wilson works in an almost absurd array of mediums, from narrative video essays to construction equipment. With a sprawling sense of adventure and what art can be, he explores the interplay of technology and psychological states. A prime example: his notorious 2009-2011 video, Workers Leaving the Googleplex, in which he attempts to interview elite workers at Google, thereby exposing the subtle meta-hierarchies of the company. The project resulted in his firing from a job as a contract employee, but it also put his name on the LA art world map. Relvas has produced an impressive catalogue of experimental pop albums, as well as projects under the names Rind and Dewayne Slightweight.  Her most recent work is a kind of performative, fluid drawing in wood joined with epoxy putty. Referencing the body as muse, Relvas sands wood down to the smooth texture of skin. The sculptures seem to bend to her will suggesting gestures and movement. Her writing is key to understanding her practice, the sculptures seen through an evolving narrative. An ambitious, experimental sculptor making installation-based work incorporating found objects and materials, Glynn uses the city sprawl as her backdrop. Her work ‘III’—a pyramid structure of pallets—served as a meeting place for performances and parties, complete with masks, musical instruments, and a snake. In 2014, after extensive research into Rodin’s bronze sculptures, she created ‘The Myth of Singularity’, a two-day performance at LACMA in which she wrestled with clay casts of the originals as fragments, which she then pieced back together in unusual positions. Milano Chow’s elegant pencil drawings pull elements from 1970s fashion photography, film noir, and architecture that she collages into tableaus. Through windows, doors or mirrors, we are offered a glimpse at the interior lives of the women depicted. Framing elements alter the scale and composition to focus our attention on the details of these internal landscapes. Her trompe l’oeil works don’t point to any specific moment so much as a reworking and merging of many. 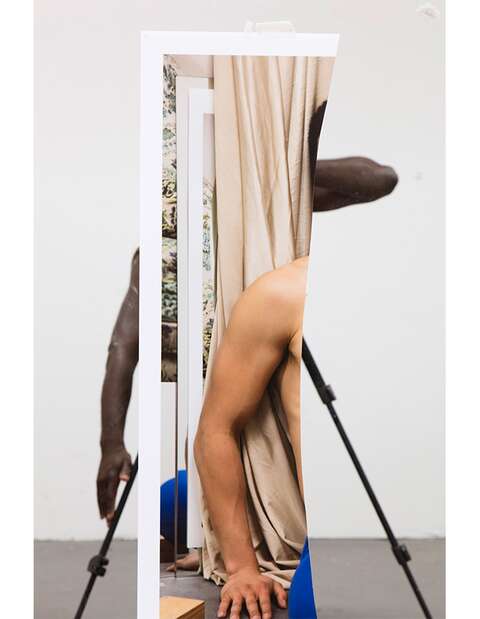 Picking up where Robert Mapplethorpe left off, Paul Mpagi Sepuya works with compositional elements such as fabric or other photographs to hide and reveal parts of the body. His photographs focus on the relationship between artist and subject, often exploring the nude and the intimacy of studio portraiture. Sepuya uses the camera in his studio to interpret photography, collage, and implicate his network of peers.

Now that you've been introduced to some of LA's emerging artists, get out there and see the art...