First, a word of warning: the New Museum’s survey of Carol Rama’s work, Antibodies, is not for the prudish or the faint of heart. Among the paintings, objects, and works on paper, you’ll find snakes emerging from vaginas, defecating figures, and penises a-plenty. Given the artist’s life, none of this should come as a shock. Rama, who lived from 1918 to 2015, experienced trauma and tragedy as a child when her father committed suicide and her mother went mad. These traumas led to her early artistic explorations, and later in life, to a strange fascination with bike tires and cow udders. Though the artist lived primarily in Turin and described herself as a recluse detached from contemporary art movements, she drew on her thoughts and experiences as material in her work. Helga Christoffersen, the show’s Assistant Curator, walked us through the exhibition and described the biographical elements that informed five of the show’s key pieces. 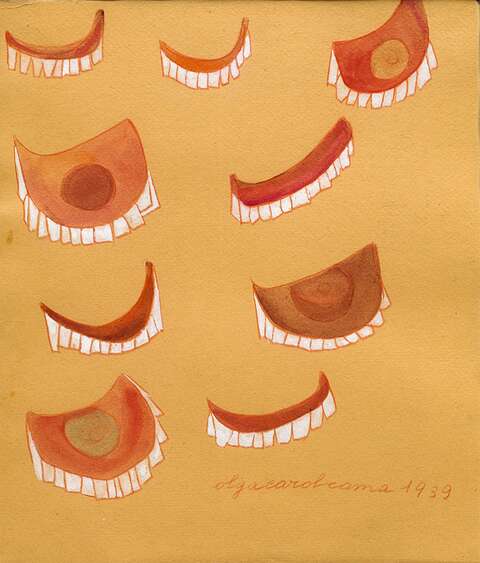 You know those dreams where your teeth fall out? Read any dream dictionary and you’ll find multiple psychological interpretations. Rama’s nine rows of ghostly teeth and gums float surreally on the page. As a child, Rama visited an uncle who took his teeth out at night, and this uncanny separation made its way into her work. This picture is part of a larger series of watercolors that the artist began as a teenager. Inspired by the uninhibited bodies she saw when she visited her mother’s psychiatric institution (where she lived after a mental breakdown), she began painting women—whole and in parts—who were shameless about their desires.
L’isola degli occhi [The Island of Eyes], 1967, Plastic eyes, synthetic resin, and enamel on canvas 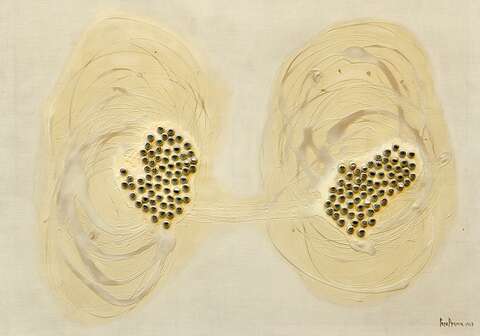 After watercolors, Rama began making bricolages, works incorporating the diverse materials available to her. In fetishistic fashion, she would find them, carry them around, and then manipulate them in her work. Here, you see plastic eyes attached to the canvas. Like any fake body part, they’re a little creepy, staring out at you in the middle of the gallery. Looking at the work, you become just as scrutinized as the painting. Behind the island of eyes, you’ll see shapes that might be understood as lungs, hearts, or even additional eyes. They’re watching you, too! In this new abstract vein, Rama found new ways to explore her obsessions with the body. When Rama was young, her father committed suicide after his factory went bankrupt. The memory haunts this work with its materials. Rama incorporates the product that the factory produced: rubber bike tires. For Rama though, a bike tire is never just a bike tire. When she saw these objects close together or in stacks, the texture reminded her of skin. In this work, the tubes hang from a metal hook. Body part referenced here? We’ll let you decide, but she got the idea when she visited Picasso’s studio and became interested in the iron hooks he used to hang pieces of cloth. Despite her self-imposed distance from the art world, Rama had some friends in high places. She went on to party with Andy Warhol and Liza Minelli. 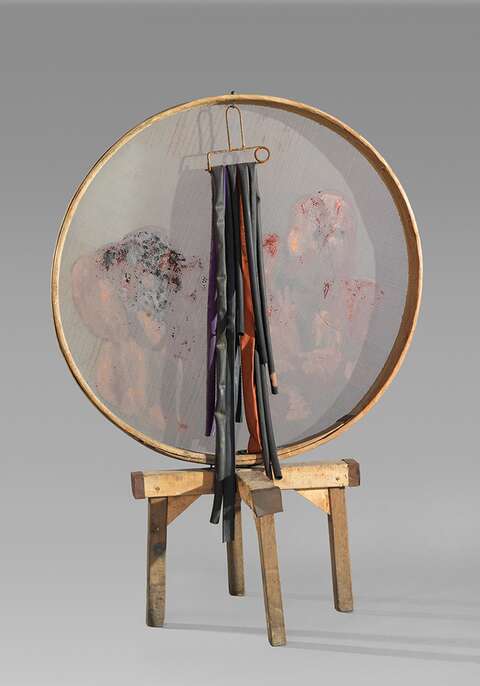 After years of working in abstraction, Rama returned to figuration that’s as imaginative and psychosexually-driven as ever. You’ll spot flying frogs, nude dudes with wings, and erect penises. Rama’s early work finally received acclaim after a critic and writer included her watercolors in a major exhibition. Bolstered by the success, the artist created more figurative paintings. This time around, she incorporated more color, narrative, and mythological elements into densely populated works. The naked men and frogs reference two episodes from Rama’s youth. The first took place when she was walking by a store selling animal skins and saw a man within masturbating. The second was the time a frog clung to her as a child, and she thought the animal was in love with her until being informed otherwise. 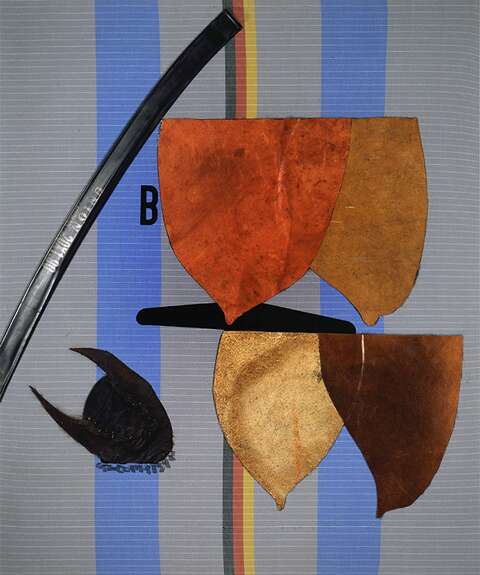 Rama’s next obsession centered on the mad cows plaguing England in the 1990s. They reminded Rama of the women she’d seen in the psychiatric hospital when she was a child. She focused on the udders, moving chaotically. As in many of her bodily depictions, Rama’s representations are separated from whole bodies. They end up resembling human breasts, too. At the end of the day, aren’t we all mad animals, reined in by societal convention? Here Rama provokes, disturbs, and prevents any happy hamburger consumption post-museum visit.