We chat with NY DJ Marco Weibel and D.C. producer Davon Bryant a.k.a. Dreamcast, before they share Le Bain's decks for the Darker Than Wax party on February 21st.
THE STANDARD: Davon once said “my favorite aspect of being a musician is meeting the people behind the sound.” How did you two meet?

MARCO: I was familiar with Davon through his music before actually meeting him. His track with Sasac, 'Liquid Deep' is a huge staple of mine! We met by chance when he showed up at my friends' Christmas party in 2018. We've kept in touch casually since then. We've been in chats about doing something together for almost over a year now so really excited for this to finally happen!

DAVON: Since I’ve known Marco, he’s been the same guy just excited about music and connecting. I tend to keep myself surrounded people like that and that’s why we’re doing this party. Exciting times. 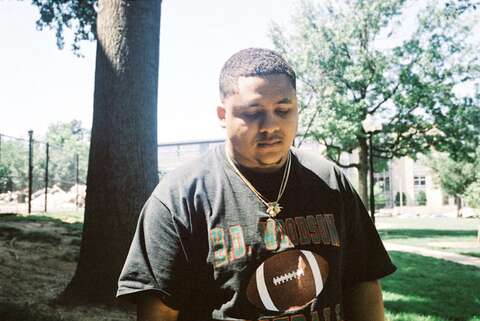 "I was constantly on my phone feeling like I had FOMO from not being out at night." – Dreamcast

Davon, You recently took a break from music production and travelled to Abidjan, in Ivory Coast. How did that happen?
DAVON: I was in a place in life where I was constantly on my phone, distracted and feeling like I had FOMO from not being out at night. So I decided to go and put my energy and focus on something that was outside of music. The people that I connected with in Ivory Coast changed my life and more importantly changed my perspective on what’s important. A clear and clean slate of mental health along with amazing food, sunlight and the ability to move the way I want to. To be honest the full story that comes with describing my trip to Abidjan is one that would take hours to write.
You said your goal for 2020 is to release records and “a story that’s cohesive”. What kind of story do you want to tell?

DAVON: One that describes hard work and the pain and the love that comes with it.
Marco,  You were born and raised in Singapore and you run the overseas operations of Singapore-based label Darker Than Wax. What’s the most exciting thing coming up for the label in 2020?
MARCO: This year is really exciting, we've recently joined the !K7 music family and they are handling all our label services, our 2020 release roster is stacked! Some highlights are an amazing album from Dominic J Marshall (who plays keys in Cinematic Orchestra's touring band), an all-NYC compilation I've compiled featuring some great artist, a new club focused 12" series called 'Body Clock' and we're also working on a sub-label called 'Artifacts' that is going to be reissuing forgotten gems from the South East Asian region! Keep a lookout! Marco Weibel by Filipe Zapelini
Marco, you once said “a great DJ has to take risks”. When was the last time you took risks as a DJ?
MARCO: I take risks every set of mine. I don't like to play things safe, plan track for track rigidly when it comes to DJ'ing. You're in a space where variables are always changing, people, sound, feelings, moods, you can go in prepared for something but you never really know what the vibe is till the moment you step up. There are certain songs that will work, but more than often I enjoy pushing and stretching that boundary –sometimes it works, other times it doesn't. I'd rather be remembered for the times that do than not try at all.

Davon, one of your favorite artist is Uku Kuut. Can you tell us about him?
DAVON: The Estonian Prince, a fallen soldier and more importantly the son of Maryn E Coote!
What does this choice tell us about yourself?

DAVON: My fondness for Uku just speaks to my love for music outside of the norm. Music that speaks of love and patience.