When you ask Nir Hod, the Israel born multimedia artist who is known for series like Mother and Genius, how he created his much-lauded piece The Night You Left, the answer may change.

“When people ask me if this is a print or did I do it by myself I always tell different stories; it depends,” Hod says. “Not because I’m a liar, it’s more because I’m a storyteller and I want to bring people into this moment that they should enjoy something because they like it. When you start to understand—to know how it’s made—it almost takes the magic away like it doesn’t really matter.”

“This is about minimalism, memory, and presenting life in a kind of beautifully romantic way. It’s really about memory because as a memory, so many things are beautiful.” - Nir Hod

Hod has been making that magic for years, cycling through a variety of disciplines. He’s published a book of poetry and released music. He’s also done sculpture work, but is most known for his realist paintings.

“I like to work in circles,” he says. “Almost like a circle of life: about age, about beauty, about simplification. I know that I’m slowly going back to things I’ve done in the past but it’s interesting because there’s an evolution but at the same time it’s nostalgic.” Those circles, and that work, widened and changed once Hod moved to New York City. 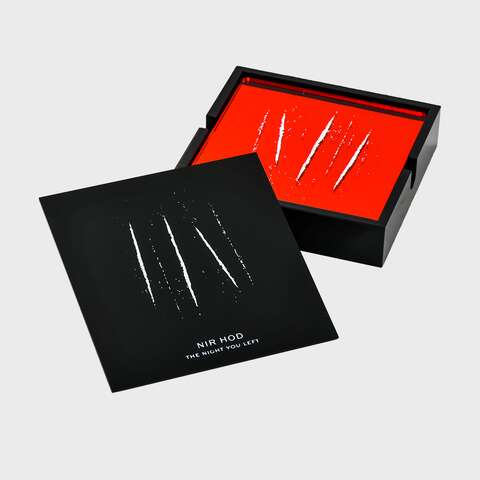 Nir Hod, The Night You Left x The Standard Coasters by Prospect

“I left Israel because I didn’t want to argue anymore with the idea of what is art or if it can be emotional or if it is something very sophisticated,” he says. Now, he doesn’t argue, he just creates, sometimes influenced by pop artists like Andy Warhol. And those creations are turned into merchandise, becoming popular object—none more popular than his The Night You Left.

At a glance, it seems evident to many what the work is: it’s a photo of a few lines of white powder on a mirror. And while the assumption that it is, in fact, an illegal substance is a valid one, at the risk of ruining the “magic,” the assumption is wrong on both counts, but purposefully so.

“A lot of my work for many years was about this relationship between paintings and photography and especially how you can produce an image in different ways but still have the same kind of” he says. “Night” does that perfectly. In reality, the work is a painting; oil on mirror specifically. One day while shooting in his studio, he became enamored by a black mirror hung up on the wall. The feeling lasted days and later, while painting in the same studio, Hod decided to paint on the mirror. Wiping the paint off was unsuccessful so he decided to let it sit for a few days to dry, and then tried to scrape off the paint with a razor, thus the final texture.

“It’s not about glamour and it’s not about so many things that people think about when they see cocaine or do cocaine,” he continues. “This is about minimalism, memory, and presenting life in a kind of beautifully romantic way. It’s really about memory because as a memory, so many things are beautiful.”

Nir Hod, The Night You Left x The Standard Coasters by Prospect are available here.