Artist Lucy Sparrow’s supermarket made entirely out of felt is open from August 1-25 at The Standard, Downtown LA, and its 31,000 adorable items are available for purchase.

No reservation required, but we recommend arriving early as there is a daily sell through limit!

In May 2017, British artist Lucy Sparrow opened her NYC bodega made entirely out of felt at The Standard, High Line, and it was such a success that we took it to the West Coast and went BIG.

Introducing Sparrow Mart, Lucy Sparrow’s felt reimagining of the LA supermarket, open August 1-25 at The Standard, Downtown LA. It’s her largest exhibition to date, with over 31,000 hand-painted and sewn versions of every grocery item imaginable, all available for purchase (some even as low as $5!). Think fruit, vegetables, sushi, fish, meat, frozen food, candy, liquor, and a health and beauty department. Sparrow Mart even has a VHS section, featuring '80s classics like Footloose, Dirty Dancing, and Short Circuit.

We're also launching Sparrow To Go in 24/7 Restaurant and the lobby for the month of August. The new eatery, designed by Angela Dimayuga and the hotel's executive chef Julio Palma, features dishes inspired by the items in Sparrow Mart.

Get a sneak peek of Sparrow Mart below. 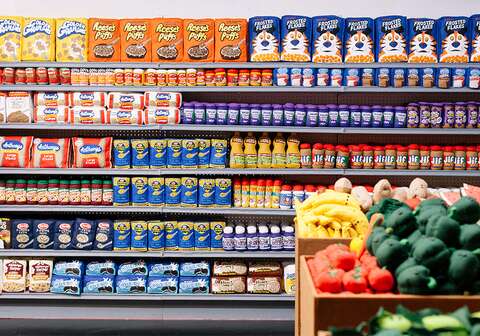