The mecca of xiao long bao (aka soup dumpling) is Nan Xiang in Flushing, Queens, and it’s well-worth the journey. Their large and juicy pork and crab soup dumplings are an art form—perfectly rich soup with skins just right. Connoisseurs say they give their Michelin-starred cousins at the famous Taiwanese Din Tai Fung chain (not in NY yet) a real run for their money. If you’re headed out to Queens, don’t forget it’s cash only. Insider tip: Put in your order for soup dumplings the second you sit down. They’re made to order, so they’re a bit of a wait. New York’s second soup dumpling institution is Joe’s Shanghai, and like Nan Xiang, they’re known for their rich, dense, and juicy pork and crab soup dumplings. Where Nan Xiang requires an adventure to Queens, Joe’s has the benefit of two locations in Manhattan. Some argue Joe’s has the best in NYC, while others say the quality has gone down over the years—either way, everyone keeps going back. They’re that good. Insider tip: Joe’s is also cash only. You might sit with strangers. It’s part of the experience. Chef Missy Robbins’ Italian hotspot, Lilia, is a triumph all around with its unparalleled vibe and phenomenal menu, but if you need any more convincing, let us tell you about the agnolotti. The finger-length handmade pasta dumplings are filled with ricotta and topped with honey, chili, and sundried tomato, and so perfectly delicate you’ll rue the day Chef Boyardee was born. Insider tip: Try to get a seat at the bar. You can hang out with the delightful bartenders, get to know fellow pasta lovers, and watch Chef Missy command the kitchen from her outpost. Sometimes, when you can’t find cooking as good as your mom’s, you have to open your own restaurant. That’s what the two sisters behind Mimi Cheng’s did, and we’re so very happy they did. Named after their mother, the East Village storefront offers traditional Taiwanese dumplings straight from their family recipes, with a few simple, solid variations. All their dumplings are great, but our personal favorite is the classic Mimi Cheng dumpling with chicken, veggies, and the perfect touch of ginger. Insider tip: Check their site for their monthly dumpling special. They partner with chefs like Missy Robbins and restaurants like Pizza Loves Emily to create inventive dumplings that will blow your mind. Our favorite matzo ball can be found at Mile End Deli, known for their Montreal-style Jewish cuisine. The founders took their grandma’s classic recipes and elevated them in quality, and their matzo ball soup is no joke. Their perfectly textured matzo ball sits in a chicken broth with poached chicken, carrots, celery, onion, and dill. It tastes so home-y it’ll make you pick up the phone and call Mom. Opened in 1920 as a bakery and tea parlor, the nearly 100-year-old Nom Wah Tea Parlor has barely changed in appearance and going there is like traveling back in time. Back in the ’80s, they shifted their focus to dim sum and offer some of the best in the city, all made to order. Dumpling-wise, they’re famous for their snow pea and leaf dumplings that are pinched at each corner and open at the top, and the crunch you get from these little pockets is unlike any other in the city. Their pork shumai are fantastic, as well. Fun fact: It’s located on the curved Doyers Street, nicknamed “Bloody Angle” in the early 20th century because Chinese gangs would conduct a lot of their bidding on the street by hiding in the curve and surprise-attacking their enemies. It’s been said that more people have violently died here than any other street in the history of the United States. Chef April Bloomfield’s Michelin-starred West Village eatery is known for two things: the burger and the gnudi. It’s worth the wait (and the money, it’s $18 for 7) for the gnudi, aka naked raviolis from heaven. Picture ricotta coated with a thin layer of pasta, brown butter, and sage melting in your mouth. Bloomfield hates making them because they’re an absolute pain, but we’ll stay thanking her with our mouths full. This nondescript hole-in-the-wall sometimes only sells one thing, the #6, and business is booming anyway. That’s how good their wontons in chili oil are. Filled with pork and covered with chili oil and veggies, the skins are thinner and chewier than usual wontons and are closer to a steamed dumpling. If you don’t like spicy food, you’ll be fine—the spice from the chili oil is just a kick of flavor. Bring cash. It was a big day in New York City when Tim Ho Wan opened in late 2016. The famous Hong Kongese dim sum chain has been dubbed “the most inexpensive Michelin starred restaurant,” and while their NYC location is their 45th in the world, it’s their first in the U.S. As you can imagine, New Yorkers freaked out, and are freaking out now. Expect a wait, and an especially long one on weekends. If you’re picturing one of those bustling Chinatown banquet halls with carts zooming by your table, think smaller, chiller, and cart-less. They’ve limited the menu to classic dim sum staples, and everything is elevated in flavor and ingredients. If we had to choose one dumpling, their shrimp dumpling (har gow) have perfect thin skins and are packed with impeccable shrimp. Insider tip: Their famous baked barbecue-pork buns are life-changing and worth the wait for those alone. And their French toast with custard dessert option is heaven sent. 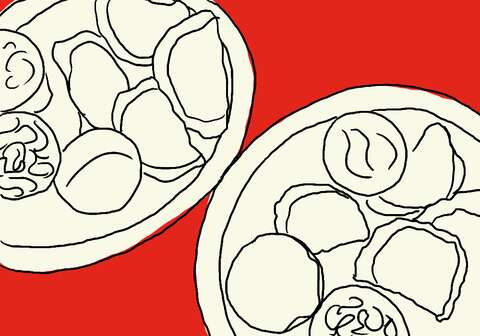 Open since 1954, Veselka is an East Village institution; the 24-hour family-run diner is one of the last remaining Ukranian strongholds in the ever-changing neighborhood. It’s packed around the clock with tourists and locals alike who can’t get enough of their handmade pierogis, so much so that they make 3,000 EVERY! SINGLE! DAY! They have a few traditional types and a special short rib option, all great, but their classic potato and cheese pierogi is what keeps us up at night. Insider tip: Don’t sleep on their potato pancakes, either. Also, located next door is Ukranian East Village Restaurant, and their potato varenyky are contenders for the best in the city.

Both in the East Village These two ramen houses are owned by the same group and have the same menu, and we keep going back for their traditional Japanese pork gyoza, which definitely isn’t an afterthought on their menu. All six pan fried dumplings are so perfectly crispy and delicate, you’ll probably want to get your own order so you don’t have to share with your friends. If you’re by yourself, cherish them. Insider tip: Sit at the bar and enjoy watching the chefs make some of New York’s best ramen. There aren’t many places to get good Turkish manti in the city as it’s so hard to make, but Turkish New Yorkers tout Turkish Kitchen has the best in the city and we whole-heartedly agree. The tiny boiled dumplings are covered in a garlic yogurt sauce, with the sourness of the yogurt perfectly complementing the beef’s herbs and spices. You can get it as either an appetizer or an entrée, but don’t kid yourself and just get it as your main. Fun fact: In traditional Turkish homes, an engaged couple has to pass a manti test, where the future bride has to prepare manti for her future mother-in-law to prove how good she is in the kitchen. Forty of them should fit in one spoon!

Upper West Side and Union Square We didn’t forget you, vegans! Even if you’re carnivorous, you won’t miss meat at Peacefood. This charming vegan eatery’s menu is fantastic, and they have one of our favorite dumplings in the city: their pan-seared shanghai-style dumplings. Filled with chives, shitake mushrooms, and marinated tofu and served with an addictive ginger balsamic dipping sauce, you’ll probably ask for another order when they’re gone.