The curators of High Line Art on bringing the artist's text-based piece to the struts of The Standard.
If you’ve been on Instagram or Facebook over the past few weeks, and you’re reading this article, there’s a strong-to-very-strong chance that you’ve seen artist Zoe Leonard’s text-based artwork I want a president. The starkness of the text juxtaposed with the unprecedented insanity of this year’s election cycle, has turned the piece into something of a viral sensation, and for some, a rallying cry. OK. So maybe this isn’t “Hillary Texting,” but this election cycle being what it is, I want a president has gotten some serious traction amongst a certain progressive, transgressive, art-savvy set. Recently, the piece was wheat pasted on the western “leg” of The Standard, High Line (visible from the High Line Park) in partnership with Friends of the High Line, and quite frankly, we’re thrilled to have it on our struts. If you haven’t seen it yet, take a look below, and go see it in person during its run from October 10th – November 15th. From now through the election day, High Line Art will also present a series of responses, readings, and performances inspired by the piece (more on that below). We were super curious to know the backstory of how Zoe’s piece landed on our legs, and our friends at Friends of the High Line (including director and head curator Cecilia Alemani) were kind enough to oblige, placing the work in the wider context of FOTHL’s vision and mission. Zoe Leonard, "I want a president" (1992). A High Line Commission. Courtesy of Friends of the High Line. Photo: Timothy Schenck
THE STANDARD: Were you surprised by how Zoe Leonard’s piece traveled on social media or was that part of its intent? What do you think the piece tapped into?
CECILIA ALEMANI (Curator and Director, High Line Art): This text was written in 1992—long before the age of social media. But back when it was first written, it still went “viral” organically. Zoe made copies of the text and passed it along to friends, who passed it to more friends or hung it on their refrigerators. Since then, it’s been read, translated, and re-imagined all over the world,  before and during elections.

I think this piece has tapped into the anxiety surrounding this presidential election, but I also think it has been comforting, and has given people hope about the potential of a different political future.

Obviously Zoe’s piece has topical implications given the current election, but is there more to it?
MELANIE KRESS (Assistant Curator, Friends of the High Line): The work is obviously inspired by the specific political moment of a presidential race, but the text speaks to the larger idea of our leadership reflecting who we are and our everyday experiences.

Do you feel that public art has a special role or function at critical moments such as the current election?
CECILIA ALEMANI: We believe that, firstly, public art is an essential element of a thriving city. One of our primary goals at High Line Art is to offer our eight million annual visitors unexpected encounters with contemporary artworks. We aim to inspire discussion, and encourage the exchange of opinions and public debate. This piece in particular embodies this facet of our mission: to create a space for visitors to share experiences so essentially personal that they carry across the differences that separate us. 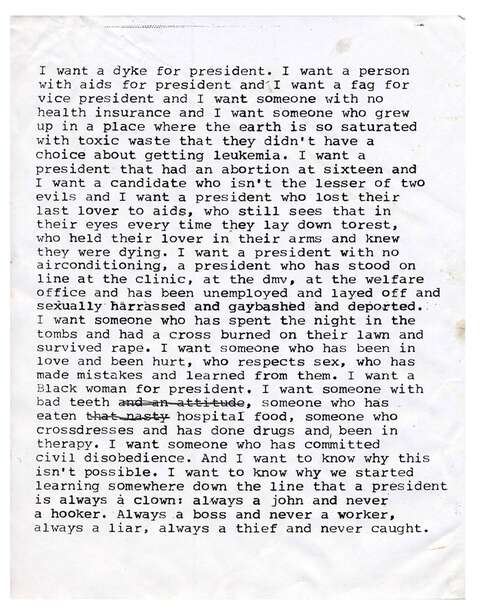 Zoe Leonard, "I want a president" (1992)
When were you first exposed to Zoe’s piece? Was there any hesitation or special consideration about the piece given its content?
MELANIE KRESS: A friend originally shared the text with me, as part of our ongoing discussions around art, politics, and disappointment. When presenting the work, we were attuned to the strong reactions of many different kinds that it may evoke, but thought that these reactions would encourage important conversations and debate.

How did you conceptualize the installation of the piece? Was it site-specific or was it tailored in some way to fit the site?
CECILIA ALEMANI: This is the largest version of this artwork that has ever been displayed—it’s site-specific to the pillar under The Standard. Zoe visited the site ahead of time to consider the placement of the work in relationship to the wall on which it is installed, and to make sure that the dimensions of the work reflected the size of the paper it was originally printed on—to give a sense of the original work being a physical piece of paper, rather than a text that could circulate anywhere, in any format. I think that this materiality reminds us also of the organic way in which the text originally circulated, and the years that have passed since then—what has changed, and what has not.

What do you think makes for a great piece of public art? Can you call out some of favorites that you’ve been involved in through the years?
MELANIE KRESS: I think a great piece of public art responds to and interacts with its surroundings—whether that be architecture, the history of the neighborhood, or the landscape design. I truly couldn’t pick a favorite on the High Line – they’ve all had their own unique stories, challenges, surprises, and experiences on the park. But I have loved working closely on performances with Naama Tsabar, Francisca Benitez, and Cally Spooner, all artist who were inspired by the High Line’s many facets, but imbued their works with their own unique visions. 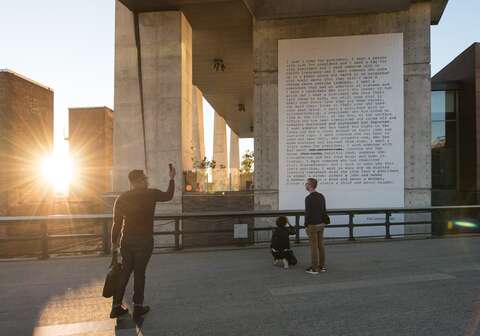 How do you conceptualize the role and experience of public art in relation to the High Line? Do you have a specific vision, or is it more case by case?
CECILIA ALEMANI: Most of the artworks we show are new commissions, the majority by artists who have never worked in the public realm. It’s exciting to see artists break out of the mentality of the white cube, and create, knowing that their works will be subject to the weather of the four seasons and millions of annual visitors. Our mission is also to provide a platform for artists in all stages of their career—emerging, mid-career, established, and overlooked.

Aside from the High Line, what other venues for public art around the world have particularly impressed you?
CECILIA ALEMANI: Fourth plinth and Artangel in London.

What attribute would you like to see in our next president?
MELANIE KRESS: Humility.

Mondays through the end of October, from 5-7pm, Friends of the High Line have invited artists, thinkers, and activists to stand on a soap box and respond in 5-10 minutes to Zoe Leonard’s text with a version of their own or a monologue inspired by it.
October 24: Ivan Monforte and Meera Nair
October 31: Amir Parsa and James Scruggs